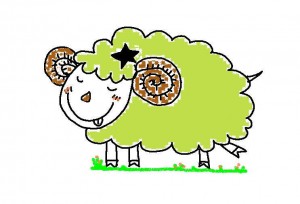 History of the zodiac sign Aries
The zodiac sign of Aries comes from a Greek myth. The golden fleece is thereby the pursued myth. Here the king of Thebes quarreled with his wife, who bore him two children. However, the children suffered greatly under the new mistress. After she tried to get rid of the children, their mother put them on a ram that had a golden and shiny coat. Only one of the children survived and later sacrificed the animal. The golden fleece then blessed the entire land.

General Aries Characteristics
The Aries is an animal with horns, and this is also very often seen in Aries people. The Aries are very strong and can fight for what they have always wanted. However, they will resort to any means necessary to do so. People show themselves to be very spirited and also very active. With an enthusiasm and dynamism they can be interested in a task. Perseverance is here, however, not long give. Therefore, decisions are also made quickly, which are later considered imprudent. In addition, Aries are also always on the lookout for new challenges, but this also gives them a certain strong self-confidence and they also cope with defeats more easily.

The Aries Man
Aries men are very adventurous and like to sow their wild oats. In doing so, they also show themselves to be very confident of victory in many tasks. However, they do not only use the enormous forces for themselves, but they also like to compete with others. Aries men are very lively and they also like to do sports. At the same time, they are considered to be very spontaneous beings who also have enormous assertiveness. Quickly they can make decisions and also implement them. Sometimes the Aries man also shows himself as aggressive and very energetic. This can be his advantage or disadvantage. On women this can also appear very dynamic. A particularly bad characteristic of the Aries man is jealousy. However, he also likes to take the initiative very much.

The Aries woman
The Aries woman is also very active and likes to undertake adventures. She knows how she wants to go her way and sometimes tries to do so regardless. However, her combative nature can also be very attractive and she often shows herself confident of victory in her actions. However, she does not neglect the important things in life, because she can set her priorities right. Due to her enthusiasm she can quickly get lost in one thing, but she can find her way out of it by her own strength. Energetically she tries to go her way, so that she avoids disappointments and injuries.

Aries in partnership
Although Aries are very keen to get their own way in a partnership, they can also be sensitive and even romantic. Although there is also a great readiness for conflict, so that a quarrel is sometimes pre-programmed, but this passion can also be gladly transformed into love. Especially Aries men sometimes count as true romantics and love it when they can conquer their partner. Aries women also like to wear the pants in a relationship and like to be ruled over. Family means everything to them nevertheless, so that they can also gladly concentrate on children and partnership.

As a fire star sign, Aries is impetuous and full of drive and this is also reflected in love. Partners who immediately ensnare him are too boring for him, he prefers to go on the hunt himself to conquer and seduce his counterpart instead of the other way around. He is impatient and wants to see results immediately, there he must learn just in love a little bit to put back and to become more patient.

love horoscope ariesIf the ram is now in a partnership he wants to keep his independence and expects from the partner also an independent behavior. With burrs he can not handle and he can not be chained. However, Aries is an honest and exciting partner for whom you sometimes need strong nerves. With him you will not get bored and he is a passionate lover, but at the same time a good buddy to steal horses. If the Aries feels comfortable in the relationship and loves the partner sincerely, he is faithful and the relationship can also last a long time.

As an Aries, you have to learn to be more patient especially at the beginning of a developing relationship and to be more responsive to your partner. Aries are rather I-related people and sometimes almost too self-confident and should now and then think about their environment and not only always see their benefit. Of course, an Aries should also not let himself be tied down, because he will not be happy in the long run in such a constellation. He should not pretend, but also times compromises can make.


Aries at work
In the occupation above all the leadership qualities of the Aries are to be emphasized positively. Through his own created goals, the Aries can also very quickly achieve what he has always imagined. The self-confident appearance impresses naturally also in the professional life and can bring him further forward. Women also like to see themselves in the career, while not neglecting the family. Sometimes, however, the pace set is too fast and you run into a wall. However, Aries also like to take responsibility for their own actions. They also like to work freelance and choose their own paths.