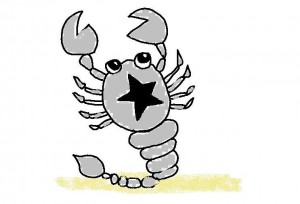 Scorpios are known as dangerous animals, but at the same time they are also a constellation in the sky. The zodiac sign of Scorpio applies to all people born between October 24 and November 22. A very strong feature in the characteristic of Scorpio is that he always knows what he wants.

History of the zodiac sign Scorpio
Scorpio is closely associated with the constellation Orion. He was considered a gifted hunter who could easily win over many women and goddesses. Among them, this naturally caused jealousy and envy. Therefore, the gods are said to have chosen a scorpion to slow Orion down. He was very confident of himself and knew his hunting skills well. However, he is said to have died from such a scorpion bite. The constellation of Orion sets in the sky even today exactly when the scorpion appears. In another legend, Orion is said to have received help from Sagittarius. Therefore, these two constellations are right next to each other. He pointed the arrow directly at the scorpion.

General Scorpio Characteristics
Since the Scorpio knows exactly what he wants, he is attributed a lot of passion. At the same time, it is often difficult to judge these people. They can be completely devoted to one thing and in turn immediately distrust the other. Sometimes the Scorpios rather want to be lonely, on the other hand they can live well only among people. The Scorpio is changeable and determines his characteristics himself. He sets his own ideals, which he likes to strive for and often tries to achieve. Others he can very easily captivate. Therefore, he does not count as an egoist. Scorpio sometimes does not have himself under control and is considered to be unrestrained. On some people he also seems slightly cool and cruel. He does not tolerate it if one doubts his ideals. Therefore, quarrels easily arise here. However, the sweet life is also not alien to the Scorpio and he shows himself in all areas with a high endurance.

The scorpion man
A Scorpio man has a very sensual and stunning charisma. Power success and passion are the characteristic features of the zodiac sign. However, Scorpios are not afraid of a confrontation and can not handle criticism very well. As lovers, they show themselves passionate and want to spoil a woman. Compromises are very rare, which is why you can quickly be hurt by such a man. As soon as the right partner is found, marriage is also an option for him. Scorpio men are considered loyal and protective partners despite their passion. They are helpful and happy to help. However, they can quickly become jealous and set their own limits. Scorpios keep silent for a very long time when something is bothering them. However, they react explosively when they can no longer stand the silence.

The scorpion woman
Scorpio women can bring men to their knees with their charisma: When they enter a room, they often have all eyes on them. Sometimes they also possess a mysterious manner that is appealing here. Sir Scorpio women have a lot of depth in their nature and are emotional. They always stand by friends and partners. She also likes to question things and can convince with her cleverness. In her main areas she shows a hundred percent commitment. At the same time she is a good mother and housewife and can take care of the family. With a Scorpio woman you get a very patient person, who is also available for exciting activities and a lot of passion.

Scorpio in the partnership
Scorpios convince with their passionate nature. If they have chosen a partner, then it is difficult to resist the sensual looks. Life offers ups and downs with the Scorpio, but he can master them well. Therefore, he is also well suited for marriage. Towards his partner he feels complete devotion. However, the Scorpio can be jealous quickly. The partner must have a lot of understanding towards the peculiarities of the Scorpio. In partnership, people of the zodiac sign can be very patient. Problems should be addressed directly, because the Scorpio likes to eat them inside. Favorable partners for the Scorpio are Pisces, Cancer, Virgo and Capricorn. Rather unfavorable partners are Aries, Aquarius and Gemini.

Scorpio people have a reputation for excitement in love and not without reason. They are among those who are said to be exceptionally good lovers, rushing headlong into a relationship and seeking a real experience. They believe in adventurous love, in the orgasm that can be experienced as if it were a "little death" and in an act of love where the lovers can melt together. It must be intense, even if the feelings move between pain and pleasure. There is no other sign of the zodiac that feels so strongly that sexuality is the secret of life. And perceives the connection between the coming and going and the becoming and the passing away deep inside.

Love Horoscope ScorpioIn pronounced cases, the Scorpio has a tendency to become addicted to sex. In general, the Scorpio wants to explore love with his partner in all facets. Trust is a basic requirement. The Scorpio man can be extremely jealous. An intimate friendship and a deep soul relationship can only be built on trust. The Scorpio has a tendency to be possessive. He/she may try to bind his/her lover(s) to him/her with his/her magical captivating power.

Responsibility should be a priority for the Scorpio. He should give others the opportunities to be able to develop. He must be able to clearly perceive the difference between what his fantasies are and what is actually perceivable in others. He should not succumb to the temptations to use his power. So it may be that he is jealous, vindictive, fanatical and tends to injustice, and deep down he might feel alone.


Scorpio at work
The Scorpio shows himself in the job as diligent with a high commitment. He feels well in leading positions and has, however, always an open ear for colleagues and employees. However, Scorpios very much want to dominate. With the positive charisma, the Scorpio can achieve a lot in the profession. He manages to move big projects by himself and to sort out problems. As a colleague he is very appreciated and creates a positive working atmosphere. Often the Scorpio can also be seen as a role model. He is distinguished by fighting spirit and sense of justice. Thus, a steep career is assured.