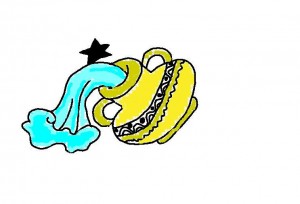 The Aquarius stands out already at first sight. Usually dressed quite funky with a weird hairstyle, he is the typical party-goer. According to the horoscope, he is the trendsetter who can inspire people and convince them of himself.

Therefore, people like to be in his company, because from a distance he is considered special and extraordinary. Besides the appearance, you will notice that the zodiac sign Aquarius usually pursues very unusual hobbies. He falls out of the zodiac sign line and does not want to commit himself, also Aquarius can not have it when over his head is determined. He is fun-loving and has set high goals for himself. The lifestyle is accordingly. This also affects the living area. A simple apartment is nothing for the Aquarius. It should preferably be a castle in Munich or a mill in Memmingen. Preferably nothing off the rack. That alone is the right incentive, there is no lack of creativity and ideas here. From the outside, this is not necessarily one of the worst qualities.

The Aquarius woman
The woman born under the zodiac sign Aquarius cannot be called a standard. She does not care what they think about her. She has a sharp mind and often shines with rather unusual ideas and thoughts. The Aquarius woman wants to be challenged. She strives for fame, but money plays only a minor role here, she much prefers the freedom she can achieve through a leadership position. Standards are alien to the zodiac sign Aquarius. Therefore, marriage is rarely considered. She rather strives for a steady relationship with a lot of freedom. A stuffy life will not go well with an Aquarius woman. But in spite of freedom she is a reliable partner, who is faithful and a little bit crazy, however you will be able to develop a lot of joy of life with her. The one or other time you will not get out of the amazement, however, immediately be captivated or carried away and also once animated to crazy deeds.

The Aquarius man
The zodiac sign Aquarius differs only slightly in the man from that of the woman. Here, too, creativity plays a very important role. Uranus is one of the formative elements. Here, too, the cool and unapproachable nature prevails. One gives here rather the head a chance, instead of deciding once after its belly feeling. The meaning of life is usually interpreted quite differently by the Aquarius man. Aquarius born people are very interested in technology and everything that has to do with technology. Therefore, in matters of technology, you will always have a helper at your side. Professionally, science is also an area which, according to the horoscope, is the ideal occupation for an Aquarius. Craftsmanship, however, he sometimes lacks, for this usually a little patience. Spontaneous is the middle name of the Aquarius. So you can go to Memmingen for coffee or to Munich for a picnic without having to think about it beforehand. This distinguishes the Aquarius and makes him desirable.

Aquarians in love
The most important thing for the Aquarius is his freedom. His urge for that even goes so far that he would leave his partner without hesitation, should he feel too much pressured or restricted by this relationship.

So applies: If he is forgiven, the partner / the partner must give him a lot of freedom, so that he can continue to cultivate his interests and friendships despite partnership. Also a relationship, which promotes the mental exchange, can function with the Aquarius very well.

love horoscope aquariusSo if you manage to bind the Aquarius firmly to you without restricting him, you will definitely be rewarded by his creativity, which usually has an invigorating effect on the relationship. Justice and tolerance also positively influence the relationship of an Aquarius. In addition, the love of an Aquarius is like a thick friendship, which leaves a lot of freedom and never gets boring.

. However, if you are into romance, you are not really in good hands with this zodiac sign, because such exuberance of feelings is alien to him.
In his sex life, he likes to try out new things and also makes use of his originality and creativity here.

All Aquarians can only be advised to take their positive qualities such as tolerance, charity and creativity into a love relationship. In addition, they should try to work on negative qualities, such as lack of romance, and improve them. Regulations and duties should be accepted and respected as such, even if they first speak against the free will of the zodiac sign.

. So with an Aquarius you do not have it easy, but once you have understood the way of life and world view of Aquarius, an exciting and lively partnership can arise.